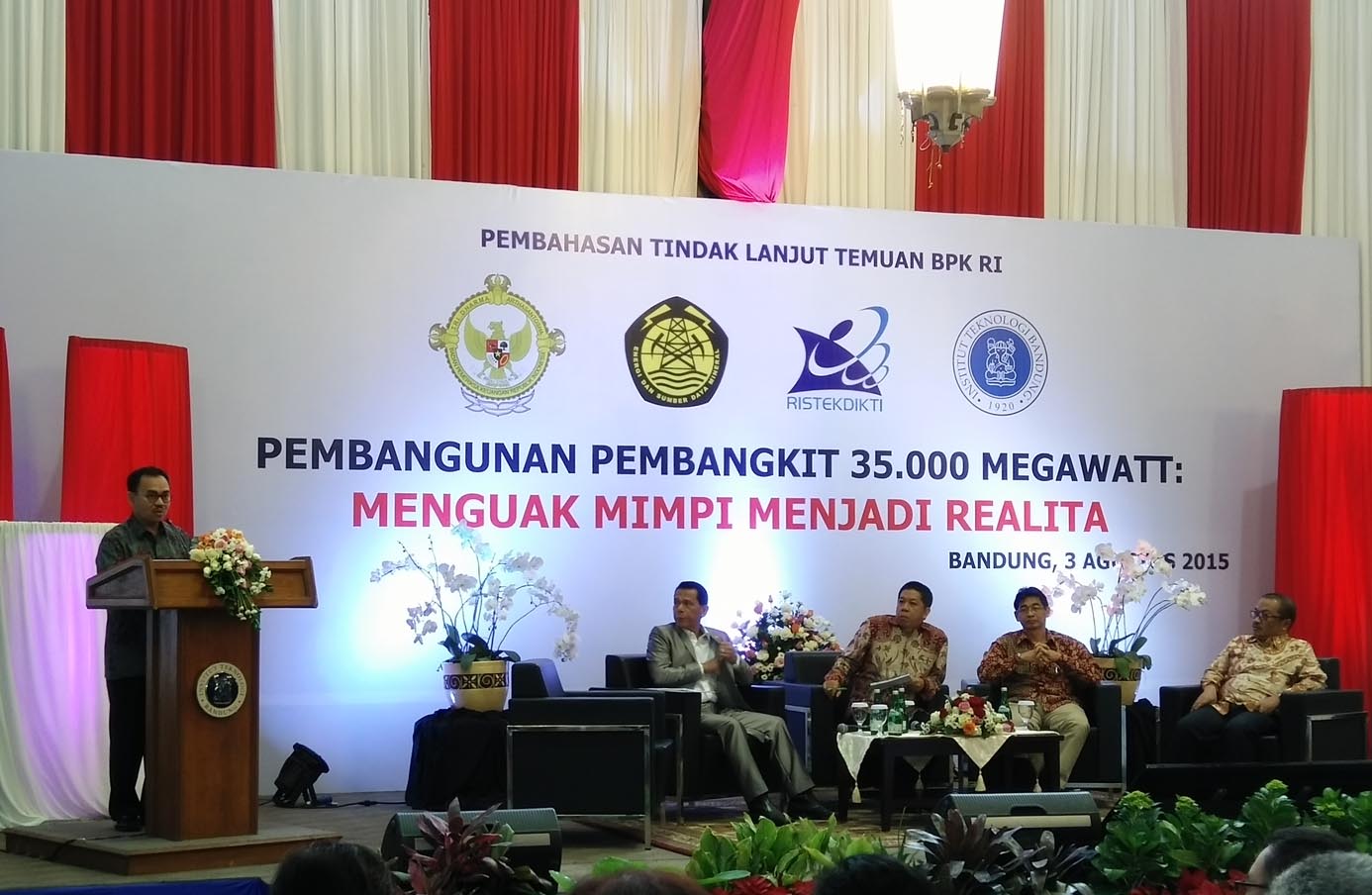 BANDUNG, itb.ac.id - All the aspects of nationality should show the essence of independence in the countdown of the 70th Independence Day of Indonesia. It is not the wise to compare Indonesia to more developed countries, but it is necessary to improve so we can catch up the neighbor countries whose ages are similar. One of the aspects that has attracted government is national's electricity.
The big step done by the government to make the equal access of lightning is the construction of power plants in some areas with the total power of 35,000 megawatt in the next five years. The program is the follow-up of Indonesia Financial Inspection Agency (BPK)'s review on the Ministry of Energy and Minerals to optimize the financial management on energy, electricity especially. The program is the part of government's target to reach 96% of national electricity in 2019. So, BPK held a seminar "The Construction of 35,000 MW Power Plants: Make Dream Comes True) in the West Hall of ITB on Monday (03/08/15). The speakers are Prof. Dr. Rizal Djalil from BPK, The Minister of Energy and Minerals Sudirman Said, Prof. Dr. Intan Ahmad from the Ministry of Research, Technology, and Higher Education, and an expert of power study field Dr. Ir. Pekik Argo Dahono from ITB. 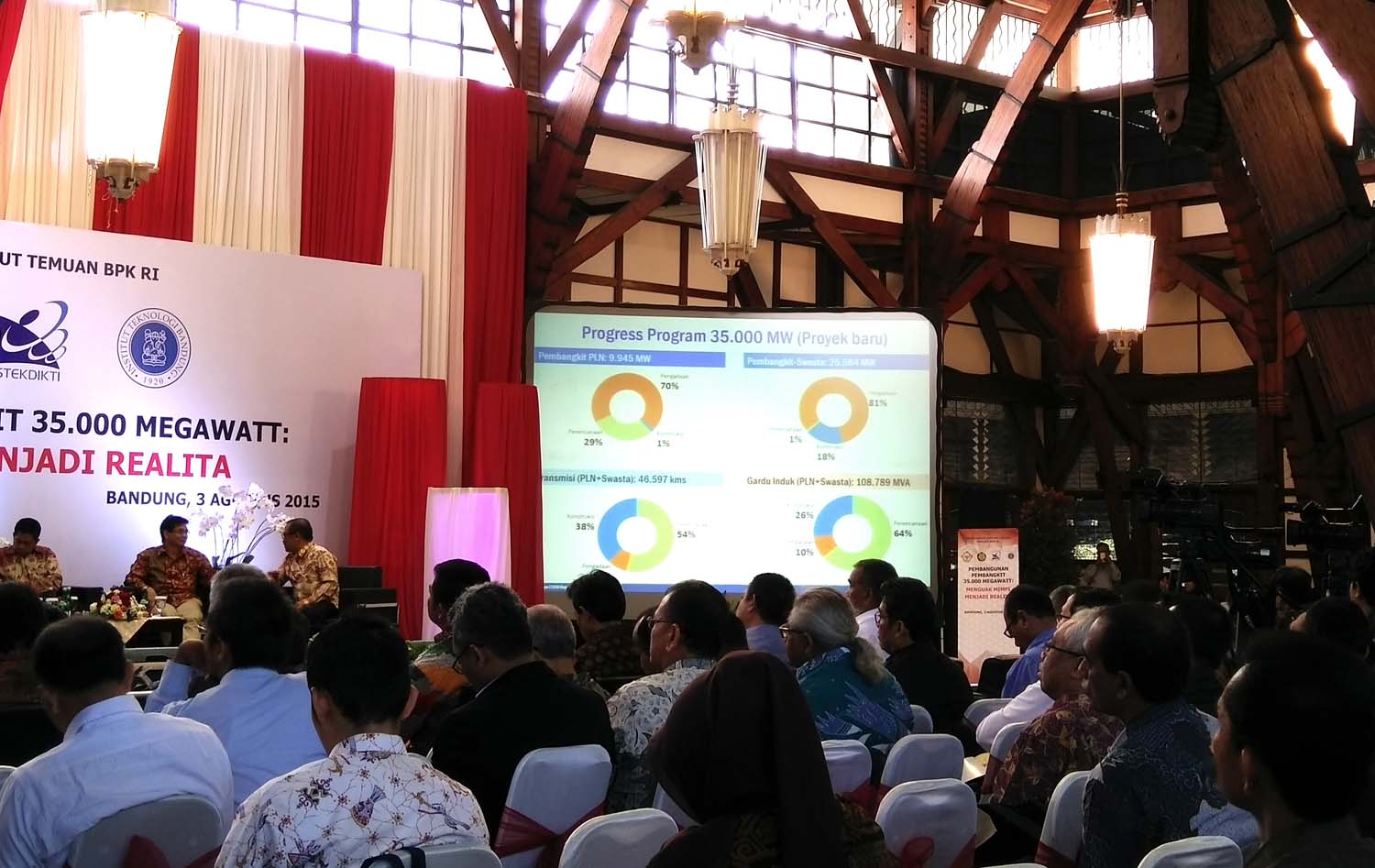 The construction of 35,000 MW power plants needs readiness and commitment from various parties, including government, academician, and people in general. The Minister of Energy and Minerals confessed that the program does not only focus on power plans but all parts of the system of electrical networking. According to Sudirman, to synergize is a must. He also hopes that bureaucracy and permission issue will not make things difficult. "The construction of power plants must be followed by the transmission and distribution," Sudiman Said said.

Along with the power plants construction in many places in Indonesia, there come many questions on the primary sources: "Will there be still fossil fuels like oil and coal? Will we turn into alternative energy? If we do, is Indonesia ready?" Answering those questions, Prof. Dr. Intan Ahmad as the Director of Education and Student Affairs in the Ministry of Research, Technology, and High Education said that the change of the sources of energy from fossil fuel to renewable energy is a must. Fossil fuel is really limited; we need another primary energy for long period of time. The target in 35,000 MW program itself consists of 25% gas, 35% renewable energy, and 50% coal. 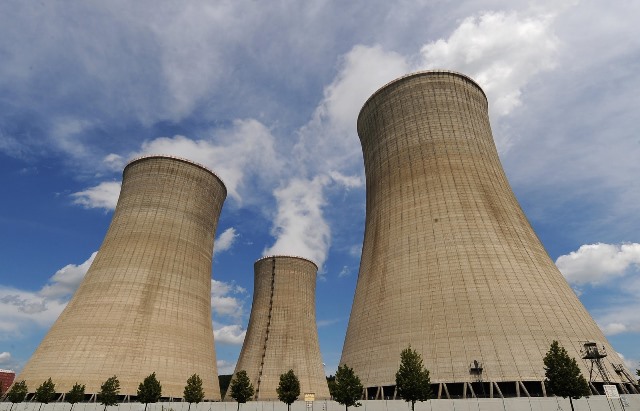 Renewable energy which is possible to be used are geothermal and nuclear. Geothermal: it is abundant especially in Sumatera and Java, but not optimally used yet. Nuclear: there have been already lots of discourses to develop it. Nuclear is environmentally friendly, it is free of emission. If it works, the cost will be low because the operation does not require fuels. It makes nuclear becomes the potential primary energy to be developed. Moreover, more countries have turned into nuclear power plants including India, Vietnam, and Malaysia.

In Indonesia, the study of proper location for nuclear reactor has been done since years ago. The potential locations have been found in many big islands of Indonesia. One of them is ready to be constructed as power plant which is Tapak Bangka in Bangka Belitung. From the side of human resources, Indonesia is ready enough. So, it needs the contribution of technology based university like ITB. The development of power plants needs experts, also the operation and maintenance. The need of human resources from Indonesia to work on the site will be one way to appreciate the big potential of Indonesian next generation to escort Indonesia to the real independency.