Lele raksasa yang menjadi maskot kampanye AIDS 2007
Bandung, itb.ac.id - Students Family of Art Student (KMSR) ITB and Pharmacy Students Body 'Ars Praeparandi' ITB, held International AIDS Day campaign, yesterday (2/12). The campaign which was in form of a parade, brought a huge 8 meter long cat fish -known as 'ikan lele'- as mascot of the campaign, along protocol roads from campus of ITB to Gasibu. They also gave red ribbon souvenir, symbolizing International AIDS Day memorization, and brochures to people along the parade route. Why 'lele' was choosen as the mascot? Parade coordinator, Fajar, said that lele complied with global theme of International AIDS day which is "Take The Lead." The theme point out the importance of youth leadership in their own environment to warn the urgency of AIDS issues. "Lele' always become main course in a meal, this symbolizes leadership. Beside that, 'lele' may also live in sewer and dirty water, and even clean it up. This symbolizes youth attitude that cannot only be frustrated seeing their dirty environment; and that even drive the dirty environment into better condition. Last, lele always swim in the bottom of stream. This symbolizes leadership in where leader must lead with humble," said Fajar. Another committee, preparing the mascot production, has another -rather simple and funny- explanation on the 'lele'. "If we want to hold a 'lele' in a basket, it will be difficult, and we will say 'eits, eits, eits' (it is pronouce similar with AIDS pronounciation)", he said. Whatever essence of the 'lele' mascot, people seemed enjoy the parade, while some of them question 'why AIDS parade use 'lele' as mascot'. AIDS (Acquired Immuno Deficiency Syndrome) is disease in where body immunity of ones, infected with HIV virus, loss their functions. That is why, person-with-AIDS is easily infected by diseases of opportunistic infection and even microbial infection that to healthy people is harmless at all. Each year, International AIDS Day is commemorated every December first. 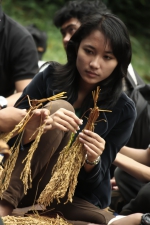 ITB Fair 2010: MURI Record Breaking for the Biggest Formation of Waste-made map of Indonesia Ever