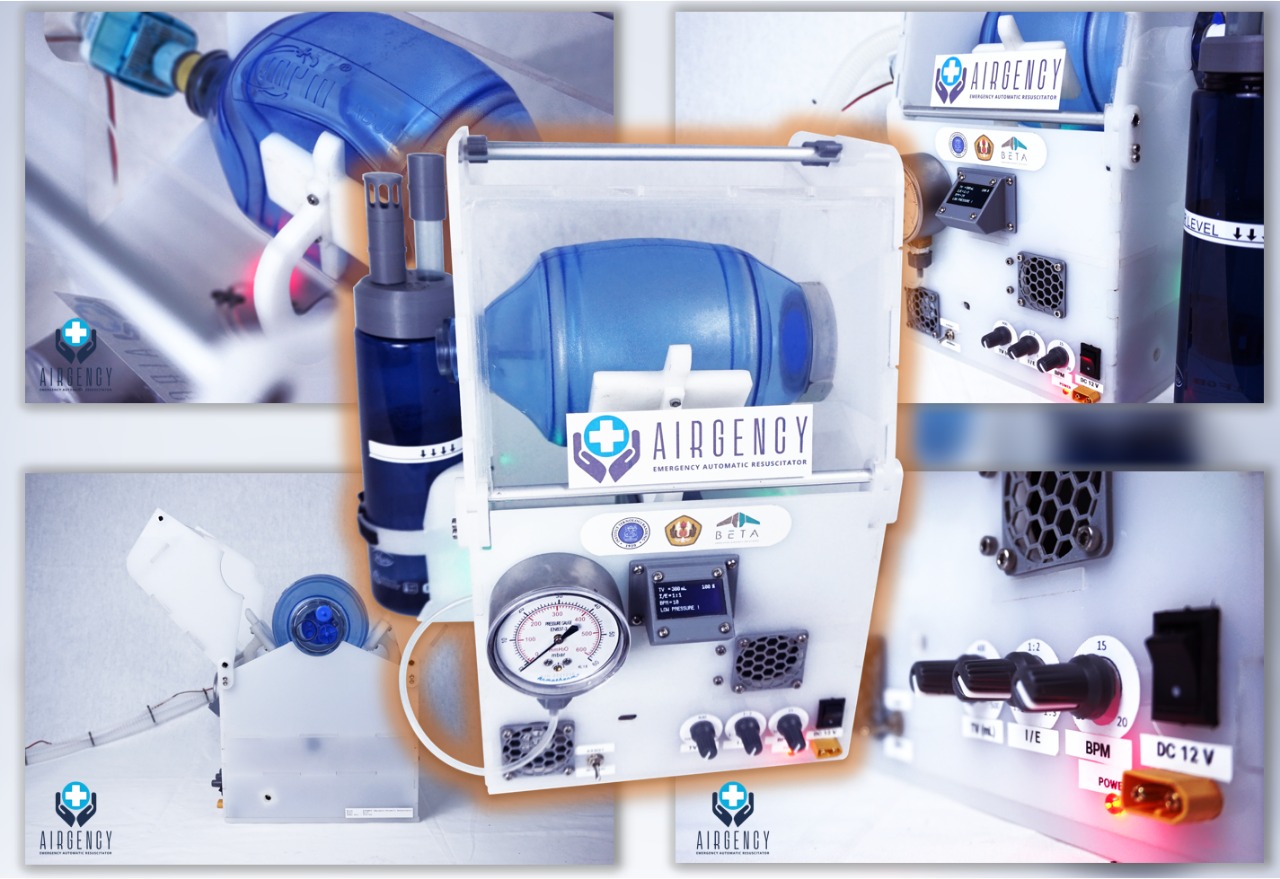 Bandung, itb.ac.id—Ambu-Air-based ventilator developed by a team from the Faculty of Mechanical and Aerospace Engineering (FTMD) Institute Teknologi Bandung (ITB) passed the function and endurance test of the Health Facilities Safety Center (BPFK) of the Indonesian Ministry of Health on 11 May 2020. After this, the tool will be clinically tested.
Airgency is a BVM (Bag-Valve-Mask) type ventilator with resuscitation function. The air bag is pressed by two automatic clamps which are carefully controlled so that all the ventilation parameters needed by the patient can be achieved. The Airgency 5.0 version has been refined to work reliably, with due regard to portability, aesthetics and ease of production.
This portable ventilator with a dimension of 22x24x37 cm for COVID-19 patients uses automated air bag technology. That doesn't need to be pumped manually any more. This innovation is intended for patients at stage three or the most critical stage in which the patient has experienced lung dysfunction, which causes the patient to be unable to breathe and needs breathing aids. Currently, Airgency has passed three types of mandatory tests for a new medical device, which are: a function test to check the features of the system, an angle safety test to ensure that the device and its functions do not harm health workers and patients (such as sharp angles) and an endurance test, which is whether the device can be operated for two days without being switched off. The next mandatory test is a clinical trial. 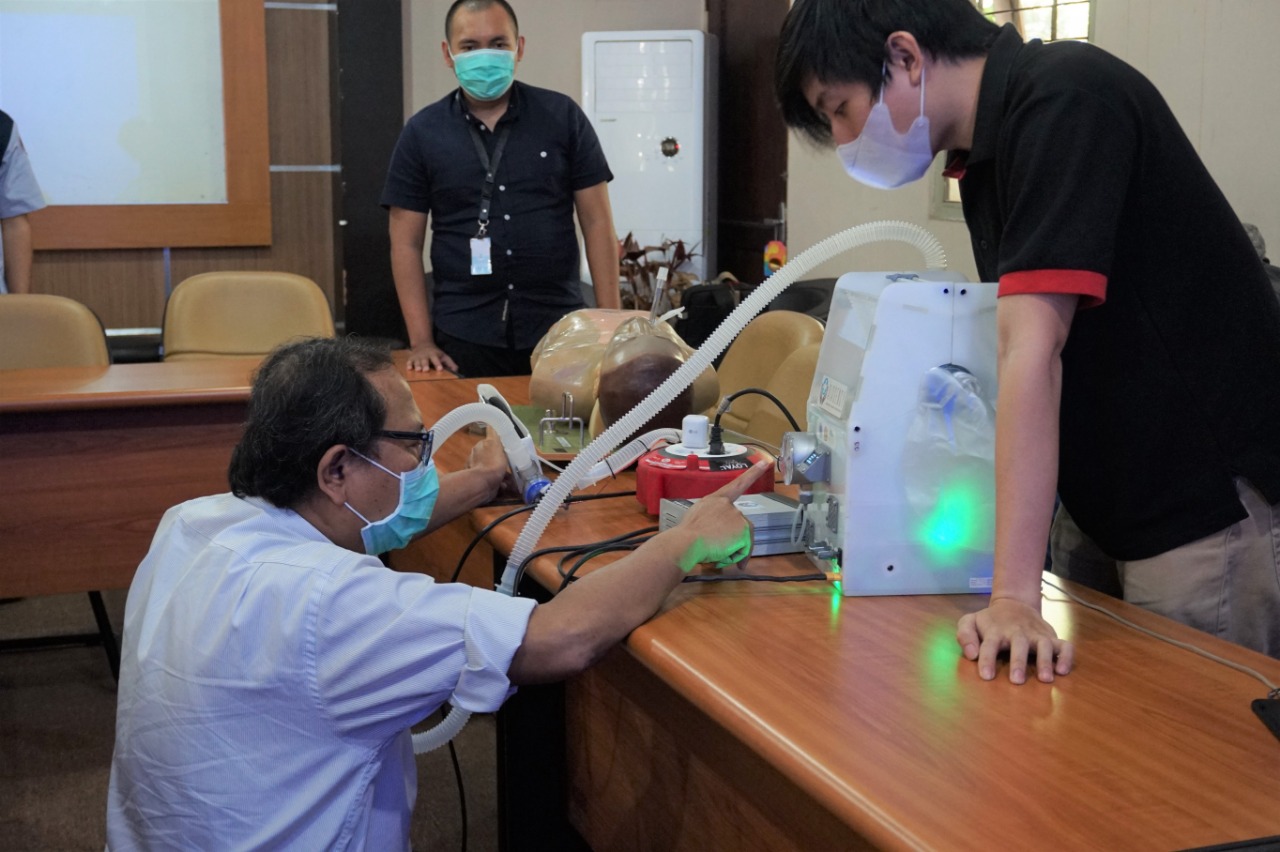 The team that developed the tool are Dr. Yazdi I. Jenie, Dr. Djarot Widagdo, Christian Reyner M.T., Dr. Khairul Ummah, and FSRD Muhammad Ihsan. The team worked with PT in the design process. BETA (Bentara Tabang Nusantara) is coordinated with a team of doctors from Universitas Padjadjaran and Hasan Sadikin Hospital. The team also coordinated the testing phase with Dr. Reza Widianto Sudjud, Sp. An-KAKV, KIC, M. Kes and Dr. Ike Sri Rejeki Sp An-KIC, M. Kes of the Faculty of Medicine Unpad.
Features in the ventilator
Christian Reyner, lecturer at FTMD ITB, explained that the main function of the Airgency Ventilator is to replace a device that has previously been operated manually. The advantage of this tool is that it has a simple system, can be operated easily and reduces the cost of production. "We hope that by passing the clinical trials, once we have obtained a distribution authorisation, we can immediately produce this tool and circulate it to the hospital," said ITB Public Relations in a teleconference video on Friday (05/15/2020).
He explained that the device has parameters to regulate how much oxygen enters the lungs of the patient. Because, Reyner explained, everyone has different breathing patterns and oxygen requirements. So, with the Airgency Ventilator, the doctor can adjust to the condition of the patient. Other settings are inspirational and respiratory, which is the ratio between the amount of oxygen received and the amount expelled. "For example, 1: 2 or 1: 3. All this can be arranged by a doctor who is in charge of patients," he said.
The next function is the aspect setting the volume. Since each patient has a different volume of air, e.g. 300 ml, 400 ml, 500 ml, the device can also be adjusted according to the volume of the patient (receiving oxygen capacity). In addition, a warning system that detects any malfunction of the device with a marked "beep" sound is another feature that is not less important in the tool. "For example, when the device is operated, there is a breathing hose that is released, then the device will sound 'beep' four times, and there is a detection of fine leakage, warning of low, high or over-pressure conditions, related to lung capacity and tidal volume given by doctors," he added.
Not only that, this Airgency Ventilator also features an automatic power source transfer system from the AC to the battery. This is expected in the event of a power failure, the power source will move to the battery and the tool will continue to operate without interruption. "Our system can last for 3-4 hours on batteries," he said.
In addition, the tool also has another feature, namely peep bottle or also known as peep and expiratory pressure. Its function is to ensure that the final lung pressure is not zero or that the lungs of the patient are too deflated.
Preparation of clinical trials
In the interview, Dr. Reza Widianto Sudjud, Sp. An-KAKV, KIC, M.Kes from the Faculty of Medicine Unpad attended not only the ITB Public Relations Team and the Airgency Ventilator Team. He explained that the clinical trial of this tool had been submitted to the Medical Committee of the Ministry of Health. "At the moment we are still waiting for a decision on the feasibility of clinical trials is the right tool to be used or not to be used," he said.
Dr. Reza said that the Airgency Ventilators will not be tested directly on patients. The reason for this is that, if the patient is tested, the patient needs permission from the patient's family, while this tool is intended for patients who stop breathing or are in critical condition. "It's not possible if it's tested directly on patients. Therefore, we 're going to compare Airgency Ventilators with ventilators that are manually pumped by human hands, and what's going to be assessed is tidal volume, pressure, etc," he said.
A device that has been tested for functional testing is required in clinical trials for the Airgency Ventilator device. Not only one device, but a number of similar tools will be tested so that we can be sure that this ventilator can be replicated and used. The clinical trial site itself is planned to be performed at the FK Unpad Laboratory.
"Making this tool is a goodwill from us to help each other, because each person has different abilities, but still helps each other. But I hope, not only during the COVID-19 pandemic, we must continue to make progress in the production of the tools we have made, as expected by the government," he said.
Reporter: Adi Permana
Translator: Moch. Akbar Selamat