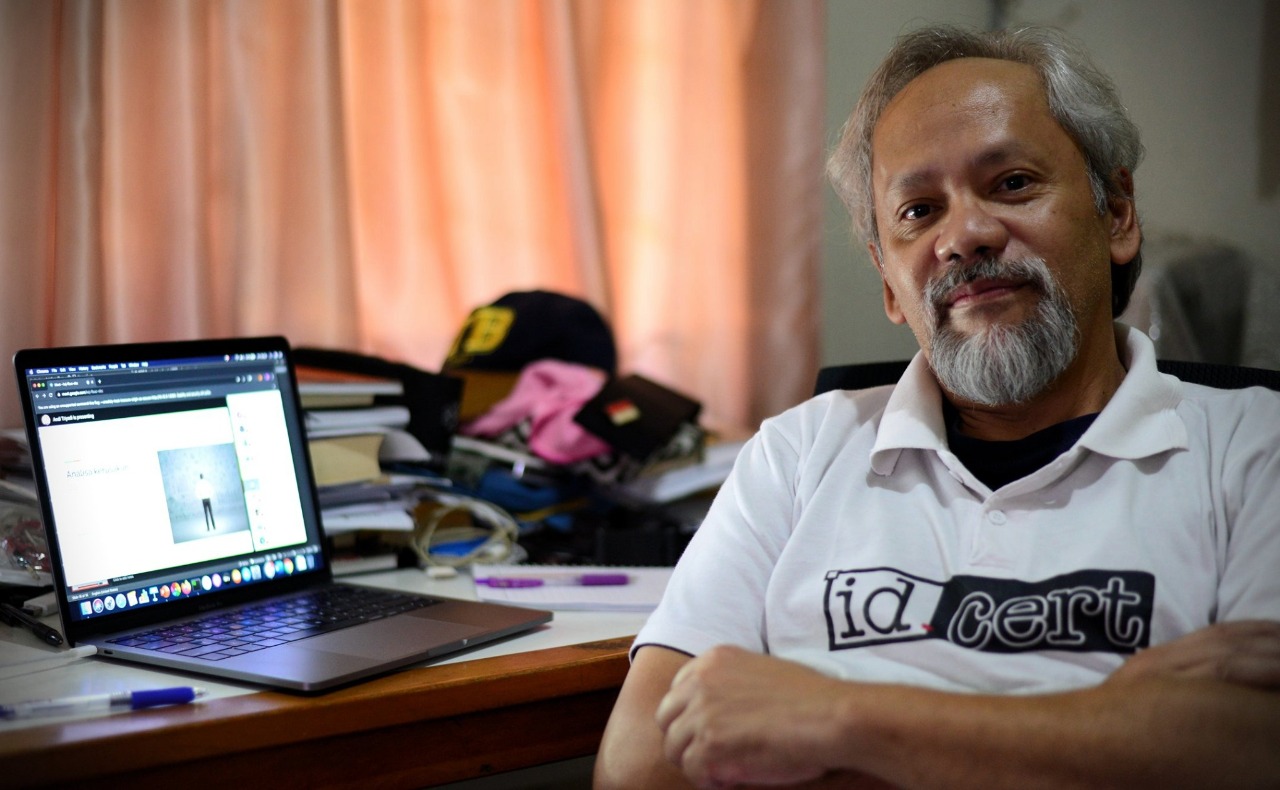 BANDUNG, itb.ac.id- Modernization is making us increasingly dependent on the internet. Every day, there are billions of people using the internet, from just looking for information until fulfilling shopping needs. Recently, there have been many issues related to data leakage and privacy issues that have been violated by several internet-based services. Related to this issue, Ir. Budi Rahardjo, M.Sc., Ph.D., was trying to discuss it.
In a talk show broadcasted live on YouTube, Budi explained that security was well understood by confidentiality, integrity, and availability. The private confidentiality is referred as privacy. There are two types of confidentiality that are tighter and looser. "In the Europe, privacy is a very strict concern for legislation. There are many laws and processes that need to be complied with. Indonesia itself is one of the countries that not really tight for this rule. It is driven by the social affiliation structure that is prevalent in society," Budi said Tuesday (5/5/2020).
The STEI ITB Software Engineering Expertise (KK) lecturer said the privacy bill in Indonesia had been prepared for a long time, but had not yet reached an agreement. Stated by him, this privacy regulation should not be too stringent, but there must also be specific guidelines for data owned by business organizations so that it is not exchanged. It is intended that enterprises such as small and medium-sized enterprises do not have difficulty in doing their business operations due to limited resources.
However, several cases of fintech offering credit also existed. For example, where the customer does not repay the loan, the fintech company accesses the contact data of the borrower and contacts the contact on their mobile phone to ask for help in collecting the money of the parties concerned. Stuff like this are expected to be treated strictly because they breach the privacy. OJK also prohibits this. "The written rules on privacy are certainly important, but we must also consider our comfort in the culture existed. Needs a discussion on this issue, there will certainly be pros and cons," he said.
Budi, analogous, if we are going outside the house, we should lock the door. The same things should be done too when we are "browsing" on the Internet, we need to provide sufficient protection for our security, which is passwords. The password set should not be letters or numbers that are easy to guess. "To create a barrier for hackers, you should create a different password for each application. Also, the chosen word should not be directly related to us, such as your date of birth or address. It is also recommended that you have at least 8 characters, because 6 characters are already very easy to penetrate. The more unique the combination and the more characters, the more permutations you need to decode.” Said Budi when asked what we can do to prevent this.
Besides providing a password that is not easy to guess, we are also recommended to have malware security or other security that can offer special alerts when there are signs of hacking on the account that we have. Also, make it a practice not to be easily caught up with fraud under the pretext of sweepstakes or other prizes, because once we click on the connection given, they could break through.
Bluetooth should also not be carelessly turned on. Things like forgetting to turn off bluetooth can potentially make our data easily downloaded. "Security is always odds with comfort, if we want everything to be safe, then we must dare to choose a path that might be less comfortable," said the lecturer who is an IT security entrepreneur.
He suggested that we should have two mobile phones, one that we use on a daily basis and the other for keeping data and important purposes, such as mobile or internet banking. We also need to update the application that we have and verify these important accounts.
According to him, there are many ways hackers can hack our privacy data, such as public wi-fi that we could use. Although difficult, wi-fi, which is a channel that is used together, can also potentially open your account encryption. Therefore, we should have apps that able to handle such hacking attempts. "In this virtual world, there will always be code makers and code breakers, sometimes code maker win, and it will always be like that,” he said.
As a conclusion, Budi continued, we need to rethink privacy security from aspects of our culture that are sometimes too sluggish, such as date of birth, school alumni, and family photos on social media. Since all the details that we upload makes it easy for people to do tracking on us. Even information in the form of an ID card can be used to commit fraud by changing the phone number of the owner and breaking into its mobile banking system, as well as being busy as fraud in the bank account. "Moreover, the problem of mobile phone number leakage is a dishonest way of demanding money transfers by telling relatives or families that they are sick or need support," he added.
Reporter: Evita Sonny
Translator: Moch. Akbar Selamat