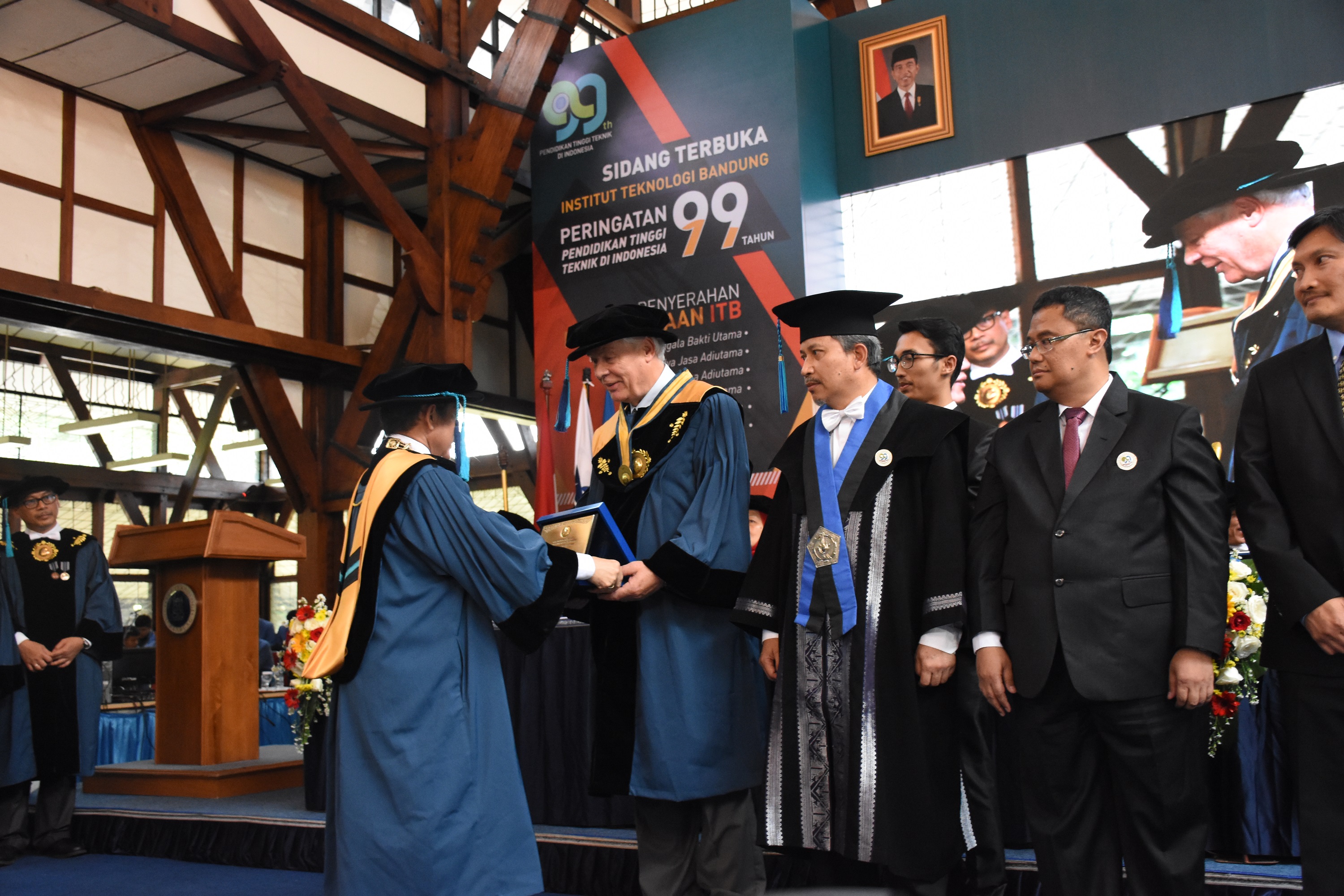 BANDUNG, itb.ac.id - Robert Hall, a researcher and professor in the field of geology from Royal Holloway University of London, was awarded the Ganesa Widya Jasa Adiutama by Institut Teknologi Bandung (ITB) at the commemoration of 99th Year Engineering Higher Education in Indonesia (PTTI) at Aula Barat of ITB Ganesa Campus, Bandung on Wednesday (03/07/2019). The award was given for his contribution to geology in Indonesia and the world.

The Ganesa Widya Adiutama Award is given as the highest form of appreciation for those who contribute in the fields of science, technology and art (IPTEKS) on international, national, or ITB levels. Prof. Hall receives the award for his more than 20 years merituous service and cooperation with ITB in the field of geology.

In an Interview with Public Relations of ITB after the awarding ceremony, Prof. Hall said that this award is a token of recognition given by ITB for cooperation that have been established so far. In addition to partnership in geological researches, Prof. Hall and ITB also sent representatives of ITB students to continue their master's studies in UK under Petroleum Geoscience program.

Regarding his research activities in Indonesia, Prof. Hall recounted one of his most interesting researches when doing a research in Halmahera. The experience made him even more interested in geological history and structure of Eastern Indonesia. There, he saw numerous geological phenomena. "[it is] Very challenging and also very interesting. There are [found] various types of geological studies such as micro paleontology, mapping, structure, and seismic," he explained.

Other distinct phenomenon in Indonesia, he said, is the fact that the country is surrounded by rings of fire, hence causing many geological phenomena in an area. He also said that people may not believe that massive changes such as seismic movements and sediment formation could be found in Indonesia.

Robert Hall is an adjunct professor at Geological Engineering study program of ITB who actively conducts researches and has 241 publications in reputable journals. Earlier this year in a public lecture, Hall explained the results of his research related to subduction occurrence, a time when the oceanic plate reached the continental plate and caused a tectonic earthquake, with the case study of Sulawesi and Banda Islands. He obtained the research data from GPS, SRTM and satellite images, offshore seismic and multibeam bathymetry, new high precision radiometric dating on land, seismic topography, and field observation.

In the future, ITB and Prof. Hall, who represents Royal Holloway University of London, hope that this collaboration will receive funding from the government and related industries because exploration, research, as well as sending Indonesian students to the UK requires a considerable amount of funding.

He also thinks that more geological researches are needed related to volcanic activities, earthquakes and their impacts because earthquakes had occurred in Lombok, Sulawesi, as well as volcanic eruptions in Sumatra. Hall hopes there will be more understanding, education, and presentation about this issue for common people. "Environmental changes is an urgent issue in Indonesia, and finding supports for future research will be a considerable challenge in the future," concluded the professor who has dedicated himself in the field of geology since 1994.

For His Contribution to Environment, ITB Confer an Award to Prof. Joni Hermana