BANDUNG, itb.ac.id - Science and modern optical technology through the development of lasers have made huge and essential contribution to the advancement of optical recording system and devices such as various camera types and up-to-date Information and Communication Technology (ICT). This shows how undoubtfully deep optical technology has infiltrated and affected the development of technology and our daily life without us realizing it. This advancement is furtherly supported by the fast growing of fiber optic (Sistem Komunikasi Serat Optik, SKSO) with a bandwith capacity up to Tb/s (Terabyte per second or 1 trillion bits per second), recording devices, and optical data management with improved speed. Through good imaging, optical data management, and laser technology, the quality of diagnosis and medical therapy has rapidly developed. 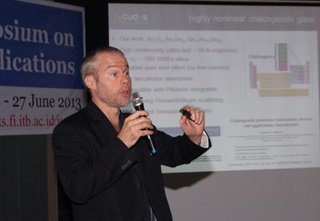 Due to the increase of human need for modern optical system, Magnetism and Photonics Group as a part of Physics Department of Faculty of Mathematics and Natural Science ITB, teaming up with Optical Society of Indonesia held 10th International Symposium on Modern Optics and Its Applications (ISMOA) on Tuesday-Wednesday (11-12/08/15) at West Hall ITB. The annual event that has been acknowledged by Optical Society of America (OSA), a leading professional society from United States in optics, discussed certain topics such as integrated photonic devices and photovoltaic, photonic crystal and metamaterials, nanophotonics and nanoparticles, nano-structured materials, nonlinear optics, new generation of LASER and (Light-emitting Diode) LED, and applications of ICT and biomedical science. This event was also sponsored by Abdus Salam International Centre for Theoritical Physics (ICTP), Optical Society of America (OSA), Office of Naval Research Global (ONRG) United States, and several other international optical companies.

This year's ISMOA was held in conjuction with the celebration of International Year of Light (IYL). IYL's agendas during 2015 will focus on both promoting the important role of optics in modern world to the public and government and commemorating first study of vision, optics, and light based on scientific method by Al-Hasan Ibn al-Haytham or commonly known as "Alhacen" or "Alhazen", whose theory led to the invention of optical communication which now is the core of Internet operation. 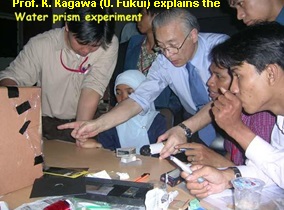 Concurrently with 10th ISMOA, Magnetism and Photonics Group of Faculty of Mathematics and Natural Science ITB also held a community service seminar entitled Light-based Science and Technology Year 2015 at Physics Building of Faculty of Mathematics and Natural Science ITB. This seminar was open to the public, especially elementary and secondary (middle and high schools) students. An exhibition of research projects of Physics undergraduate students and demo of simple instruments to show optical phenomenon were included in this seminar. This community service also featured Prof. Kiichiro Kagawa from Fukui University, Japan as a speaker in a studium generale on Tuesday (11/08/15) at Bosscha Hall, Department of Physics ITB. This studium generale invited non-higher education (elementary or secondary) teachers in order to give further understanding that optics-related knowledge is more easily delivered to students at early age.