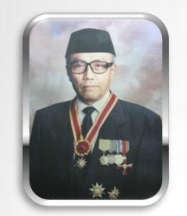 BANDUNG, itb.ac.id- ITB's civitas academica has lost its honorable teacher and senior, Prof. Dr. Ir. Harsono Wiryosumarto, M.S. Met. The day of grieve was fell on Monday (09/03/14) at 08.00 WIB, Harsono closed his age in Pondok Indah Hosiptal, Jakarta. In his life, Harsono has had a great contribution to ITB and pther government's institutions even after his pension time.
According to the lecturer's mailing list of Faculty of Mechanical and Aerospace Engineering (Fakultas Teknik Mesin dan Dirgantara-FTMD), Harsono was having a serious illness. Since the day before, Saturday (08/03/14) Harsono had stayed in ICU room of Pondok Indah Hospital and was told to be in critical condition.After his death, the body was brought to his home at Cibubur, Sunday (09/03/14) at 15.00 WIB. The funeral was held in San Diego Hills Funeral and his last good-bye was followed by a special military cermony on Monday (10/03/14) at 09.00 WIB.

All Time Service
Harsono was among the first generation of mechanical engineering lectures, together with Ir. Wiranto Arismunandar, Prof. Samudro, and Ir. Tata Surdia. Beside that, on the early 80s this alumni of ITB's mechanical engineering was chosen to be the Dean of Faculty of Industrial Engineering (Fakultas Teknik Industri-FTI) which is among the three initial faculty in ITB, Faculty of Mathematics and Natural Sciences (Fakultas Matematika dan Ilmu Pengetahuan Alam- FMIPA), Faculty of Civil Engineering and Planning (Fakultas Teknik Sipil dan Perencanaan - FTSP), and FTI. Then he continue his service as lecturer in FTMD untill his pension on early 2000s.

Part from his duty in ITB, Harsono's concern in academics was shown in his contribution as the University Quality Assurance Agency of University of Al-Azhar Indonesia. Also, he joined forces with BJ Habibie in The Agency of Assessment and Application of Technologi (Badan Pengakajian dan Penerapan Teknologi - BPPT) after his pension.

Harsono was also pointed as the Chief of National Institute of Aeronautics and Space of Indonesia in 1991-1999. In the year of 2000 he was also join the National Advisory Board for Journal of Material Science Indonesia. Along his life, numerous of his academic works and also scientific speeches has fulfill the development of science in Indonesia. One of them were his book titled "Teknologi Pengelasan Logam" that he wrote together with Prof. Dr. Toshie Okumura.