BANDUNG, itb.ac.id - A hundred and five new pharmacists attended The Oath & Inaugural Pharmacists on Thursday (24/10/13). Held in The West Hall of ITB, this event is a routine agenda of School of Pharmacy ITB, Pharmacy in particular. This event is held twice in a year, in May and October.

The new pharmacists spoke their pharmacist's vow lead by The Dean of School of Pharmacy ITB, Prof. Dr. Daryono Hadi Tjahjono, M.Sc. The vow was spoken in front of Rector of ITB, Akhmaloka, Board of School of Pharmacy ITB, Head of the National Agency of Drug and Food of the Republic of Indonesia (BPOM RI), General Director of Pharmaceutical and Medical Devices, The Head of BPP IAI, Chairman of the National Pharmaceutical Committee, Regional Executive Pharmacist Association Indonesia, the ecclesiastics, and the pharmacist's parents and families.

Every year, School of Pharmacy ITB held a pharmacist educational program for the bachelor from Pharmacy to be a pharmacist. The objective of this program is to fulfill the pharmacist's competence based on national standard from The Society of Pharmacy's Undergraduate Indonesia (Ikatan Sarjana Farmasi Indonesia) and global standard from Federation Internationale Pharmaceutique. With this standard competence, the graduate pharmacists are lead to work according to their passion in any pharmacy fields, such as pharmaceutical industries (formulation and materials), pharmacy services (hospital and dispensary), regulation (control, development, test and check), scientific (research, development, education, and training), and in any areas related to pharmacy.

Also in this event, some prizes were awarded to the highest GPA winner from each course in School of Pharmacy and the highest test score achiever. The highest GPA from Production Pharmacist and Quality Testing for period October 2012 - September 2013 was won by Shirly. Shirly was also awarded "Dexa Award"  from PT Dexa, one of well known drugs company in Indonesia. The highest GPA from Pharmacy Services was won by Widyastiwi, who was awarded with "Wardah Award". Award was also presented to the highest test score achiever in pharmacist's tests, Niknik Widanengsih who received an award from PT Novell Pharmaceutical.

In that opportunity, Moehammad Djoehana Wiradikarta Award was also awarded to the highest GPA winner from undergraduate program. This award was awarded to Eriwan Susanto for Science and Pharmacy Technology and Aleandra Vania Andi for Clinic Pharmacy and Community. 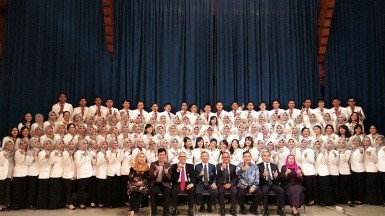