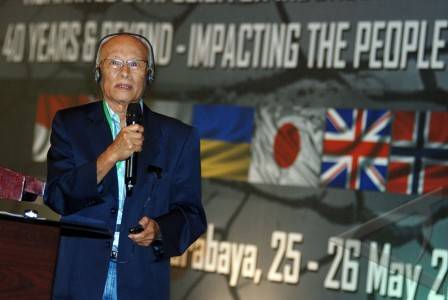 t breath on 20.25 at RS Santo Yusuf, Bandung. The remains was given a final ceremony on Friday (15/03/13) at West Hall, ITB and later on was buried in ITB funeral, TPU Cibarunai, Sarijadi, Bandung.

The front gate of ITB was filled with a lot of flower bouqet from various institution and the west hall were crowded with a lot of mourners who dedicate their last goodbyes to the professor. After going through shala at Salman Mosque, the entourage departed to the funeral right away.

Sukendar Asikin, usually called Kendar, started his career in Geology since 1959 . He is rich with a lot of experience in Geological mapping, from Whitehall, USA untill Bohorok, Northern Sumatra. He also put a lot of interest in tectonic plate and hydrocarbon exploration.

His love in Geology urge the dream to build a place to study for students in learning and researching geological knowledge in Indonesia. Together with Prof. J. A. Katili as the head of National Institution of Geological and Mining, Kendar initiated the natural laboratory for college students. This laboratory is called Information and Conservation of Earth Sciences Center Karang Sambung. It is located in Karang Sambung village, Kebumen, Central Java.

Kendar had significantly contributed his life inside and outside campus. That Center that he built was a solid proof of his dedication in the learning and education of Geology. Not only from ITB, student from all Indonesia had used this place and receive a lot of benefit.

Born in Bojonegoro, 23 September 1932, Kendar finished his undergraduate study in University of Indonesia (UI), his Magister was from Indiana University, USA and his Doctoral was from Bandung Institute of Technology in 1972. As a teacher, he taught and produce a lot of expertise in Geology. His step in building a laboratory in nature and his critical thoughts was a part of his service to the nation.

This Geology Professor has multiple tracks of desease, one of them is cardialogu desease. Anyhow, Kendar was still actively involved in earth sciences. His expereience in geophysics, mapping, gravity, and green transportation made him a valuable and respectable person in science world.

The Professor of ITB: Make Indonesia as The Most Complete Natural Disasters Laboratory in The World