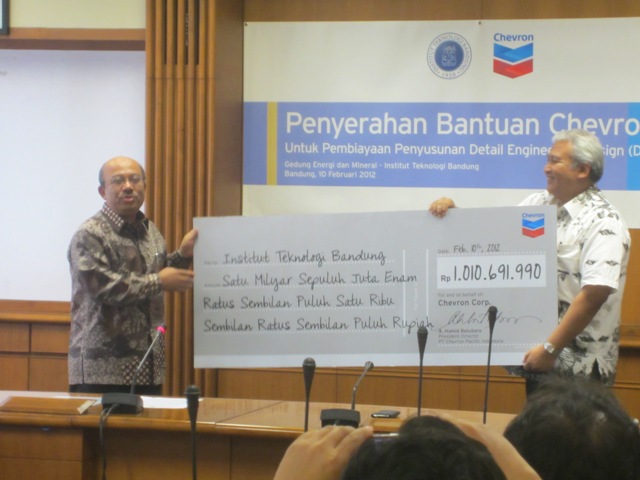 BANDUNG,itb.ac.id - On Friday, (10/02/2012), PT Chevron Pacific Indonesia awarded a Rp. 21.000.000.000,00 grant in form of the Detail Engineering Design for the construction of ITB's Energy and Mineral Building. The grant was symbolically awarded from the Director of PT Chevron Indonesia to ITB's president Prof. Dr. Ahmaloka. It is one of Chevron-ITB's partnership program that has been going since 2006. "We're glad to receive the grant," stated Ahmaloka in his welcoming speech. The DED grant will help to complete the overall design of the building that is planned to be finished in 2014.
Abdul Hamid Batubara said that it shows Chevron's concern in improving the quality of Indonesian human resources in the fields of energy and mineral resources. "It will not be ITB's exclusive privilege; the facility is built for every academician who plans to develop the field of energy and mineral resources in Indonesia," added Ahmaloka. About the construction of the building, Ahmaloka stated that he will form partnerships with government and private corporations. The completion will cost about Rp. 110.000.000.000,00 and it's built to ensure Indonesia's energy security. Researches that will took place in the building are energy-related based on three principles: availability, deliverabilty, and accessibility. 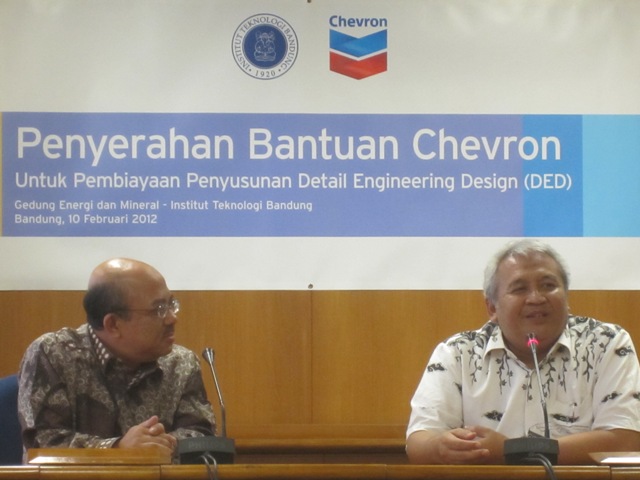 Chevron has been a partner of ITB through University Partnership Program since 2006. According to Abdul Hamid Batubara, up until now, most energy experts who work in Indonesia are expatriate, while ITB has an immense potential to give birth to experts in the particular field. It's one of the reasons UPP Chevron has assisted ITB through in various efforts that include giving scholarships, aids in building laboratory, and grants on courses/international conferences, among others.

ITB and Chevron Inaugurate The Petrophysical Laboratory of FTTM