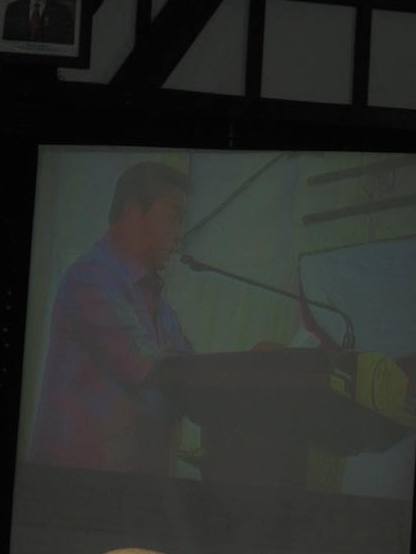 BANDUNG, itb.ac.id- Coinciding with the anniversary of the Tenth of November Institute of Technology (ITS), the Indonesia Innovation Forum (FII) 2010 was held on Tuesday and Wednesday (December 14-15th, 2010) in the campus west and east halls. With the aim of growing and developing innovation and creativity, which was aligned with the spirit of ITS' anniversary, ITB connected its event to ITS. One of the contents presented via the teleconference was a general lecture delivered by President SUsilo Bambang Yudhoyono.

In a lecture titled "Accelerating Innovation Technology in Order to Achieve National Economy Advantage", the president stated that Indonesia aims to grow into an emerging economy in 15 years. A constantly increasing GDP and income per capita, along with positive growth amidst the global recession, have proven that Indonesia has a high potential to become an emerging economy like Brazil, Russia, India, and China.

President SBY emphasized the importance of revamping a few things, such as interprovincial and island infrastructure and an adequate communication and information infrastructure. These are the prerequisites of economic growth.

Aside from that, the president also elaborated the concept behind Indonesia's growth in the following years; balance, sustainable, and inclusive. Balance in the sense that the growth should be felt by all sectors and all regions. Sustainable, meaning it will abide to environmental limits. Inclusive as in the growth should also be felt by the lower-class economy.

To ITB and ITS, the president left a few hopes; first, for the individuals to increase their competitiveness, second, to increase innovation capabilities are increased, third, to develop the economy and creative industries and combine technology with arts and creativity, fourth, to build domestic connectivity by improving the infrastructure, and lastly, to develop strategic industries and national defense by reducing weapon and strategic utilities import.